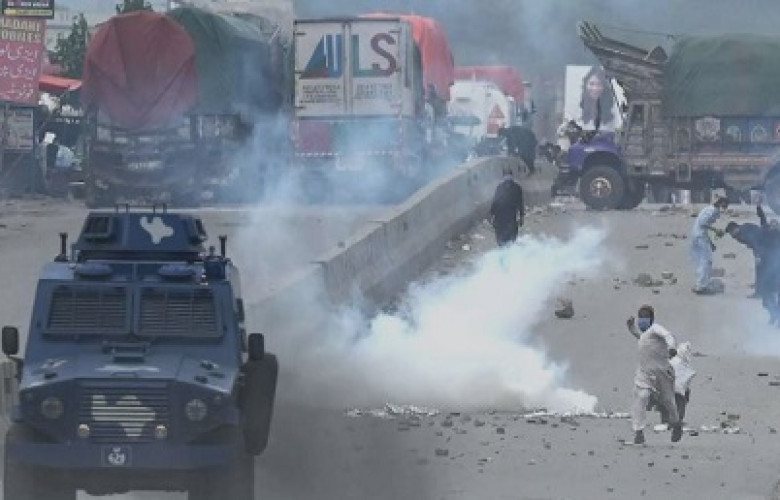 The government banned a right-wing religious group, then gave in to its demands. Which way does it go now?

Pakistan is at a crossroads, with a choice either to become hostage to religious groups or to take independent foreign policy decisions. After making an apparent shift away from its policy of tolerating extremist religious organisations, Pakistan’s government last week surrendered to the demands of a religious party – Tehreek-i-Labbaik Pakistan (TLP), a recently banned right-wing political and religious organisation.

On the TLP’s demand, the government of Prime Minister Imran Khan moved a parliamentary resolution for debate on the expulsion of the French ambassador over the publication in September last year of blasphemous caricatures by French magazine Charlie Hebdo. The resolution called for the protection of the sanctity of the Prophet. In return, TLP called off its protests across the country.

A day earlier, Prime Minister Khan had opposed the TLP’s demand, declaring that severing ties with France would cost Pakistan’s relations with the European Union, which would damage the country’s economy and exports.

Pakistan has faced a breakdown of law and order since 12 April, when police arrested Saad Hussain Rizvi, the leader of TLP. Rizvi’s detention triggered violent protests by thousands of TLP activists and supporters in the country's major cities, who demanded the government expel the French ambassador.

A clash between the police and TLP activists took place last week, when police launched an operation to clear the area, where TLP workers were staging a sit-in in Lahore. At least three TLP protesters were killed and several others injured from both sides.

The government’s initial measures – detaining TLP’s leader, banning TLP for its involvement in acts of terrorism and cracking down on its members – showed the government’s reluctance to be blackmailed by Islamists. Critics point out that religious parties have been exploiting the sensitivities of the society to garner popular support, but that the state’s policy of tolerating such groups, despite national and international concerns, has been foolish.

This is not a first-time incident – Pakistan’s governments in the past have been coerced by Islamists, but what is different this time is the government's mishandling of the TLP protest and miscalculation of its popular support across the country for the sensitive issue it raised.

It was Khan’s government that signed a deal with TLP leadership last year promising to move a resolution in parliament by 20 April to seek approval to expel the French envoy. It was the government that failed to keep its promise. The question is why did the government commit in black and white to do what it could not do? The TLP was just asking the authorities to implement what it agreed to in the deal.

It was Interior Minister Sheikh Rasheed who first blundered the situation by detaining Rizvi, declaring the TLP a proscribed organisation and ordering a countrywide crackdown on the protesters. But the government's strategy and its propaganda against the TLP backfired – its handling of the group has garnered further sympathy and support for the TLP’s cause from the general public.

TLP belongs to the Barelvi school of thought, whose adherents are traditionally peaceful and have not been associated with extremist or jihadist groups such as Tehreek-i-Taliban Pakistan (TTP). TLP was founded by cleric Allama Khadim Hussain Rizvi, the father of Saad Rizvi, with the sole objective of defending blasphemy laws. The party first appeared in the national mainstream in 2017, when it staged a sit-in in Islamabad in defence of the country’s blasphemy laws.

TLP’s protests over incidents of blasphemy have enjoyed massive support from the overwhelming majority of Pakistanis, with scholars from Wahabi and Deobandi schools of thought and the Shiite sect supporting the group’s stand.

In a televised address to the nation, Khan admitted that his government and TLP were in agreement on ending incidents of blasphemy, but the two have different approaches. Khan proposed a joint action by heads of Muslim states to stop incidents of blasphemy and to convince the West why Muslims are offended by disrespect for their religious beliefs in the name of freedom of speech.

Blasphemy is a hugely sensitive subject in Pakistan, which has a 97 % Muslim population. Under the blasphemy law, desecrating the Koran or defaming the Prophet is a capital offence punishable by death.

The issue is central to the Muslim faith – blasphemy is a concern not just for the religious right, but also for the common Muslim. That is why TLP may have just a few hundred members, but it has supporters in the millions across all sections and sects of Muslim society.

While the political and security scenario across the region appears to be in a state of flux with the future of Afghanistan in question, the rise of TLP is a particularly local phenomenon. And how the government chooses to proceed now will have lasting implications.