Russia and Turkey: Sometimes strongmen need to get along 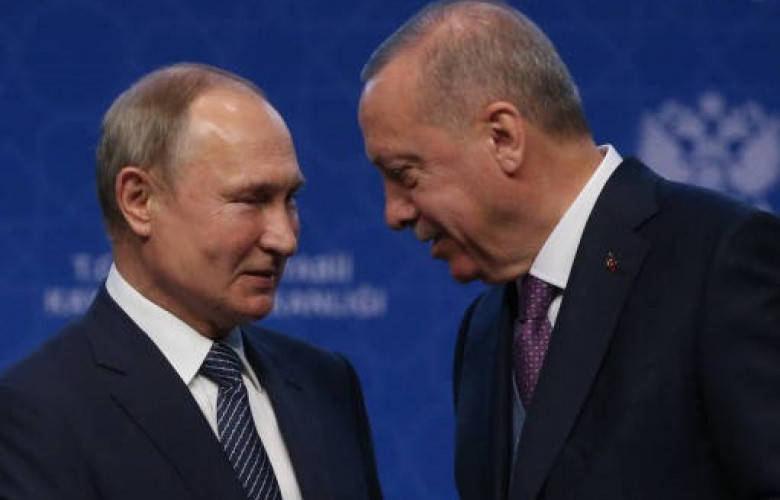 Ahead of this week’s meeting between presidents Vladimir Putin and Recep Tayyip Erdoğan in Sochi, it’s worth trying to make sense of the important yet complex – and occasionally baffling – relationship between Russia and Turkey. The key to understanding this lies in their intertwined interests and aspirations in Eurasia.

Russia and Turkey share a long and often adversarial history. Rivalry between the Ottoman and Russian empires saw the two powers clash frequently in the 18th and 19th centuries, especially in the Balkans, where Moscow positioned itself as defender of Orthodox Christians against their Muslim overlords in Constantinople. Turkey and Russia/Soviet Union were, mostly, on opposing sides throughout the 20th century, including during the Cold War, when Turkey was a key frontline North Atlantic Treaty Organisation (NATO) ally along the USSR’s southern borders.

With the disintegration of the USSR, relations – especially economic – between Russia and Turkey developed quickly. At the same time, with Turkey looking to expand its presence and influence in the newly independent states of the South Caucasus, Balkans and Central Asia, old geopolitical tensions between Russia soon resurfaced, with Moscow wary of Ankara’s intentions.

What drives the relationship?

Trade and investment ties are significant. Bilateral trade totalled US$26 billion in 2019 – mainly Turkish imports of energy and grain, while Russia is an important market for Turkish agricultural producers. Russians make up the most foreign tourists to Turkey – about 4.7 million (20 per cent of overall visitor numbers) in 2021. Besides providing about 45 per cent of Turkey’s natural gas and a quarter of its oil, Russia is also building the country’s first nuclear power plant.

But, especially over the past 15 years, interwoven geopolitical interests and strategic aspirations have increasingly shaped relations between Moscow and Ankara. Russia and Turkey both seek to rebuild their standing and influence as pivotal Eurasian regional powers. Moreover, they prefer to minimise the role of outside powers and multilateral institutions in managing affairs in their neighbourhood.

Personal affinities are important too: Putin and Erdoğan alike project images of populist strongmen, sharing nationalist outlooks. The two leaders understand and can work with each other. But their regional ambitions inevitably produce friction points when the two countries rub up against each other. For example, Russia and Turkey back opposing sides in Syria, Libya and the South Caucasus. Yet they have, usually, succeeded in managing their rivalry pragmatically. They cooperate when their interests align, but work around each other when they don’t – establishing a modus vivendi that avoids direct confrontation. Bilateral trade between Russia and Turkey totalled US$26 billion in 2019, made up of mainly Turkish imports of energy and grain and Russian imports of Turkish agricultural products (Jaroslaw Rogov/Unsplash)

The trilateral Astana format set up by Russia, Turkey and Iran to manage Syrian issues is a good example, bypassing the United Nations peace process. Another is the ceasefire arrangement brokered by Moscow to stop fighting between Azerbaijan and Armenia in late 2020, of which Russia and (implicitly) Turkey are guarantors, sidelining the former Organisation for Security and Cooperation in Europe (OSCE) process, which included the United States, France and Russia.

Even when events have threatened to derail the bilateral relationship – notably Turkey’s downing of a Russian Su-24 fighter near the Turkey–Syria border in November 2015 (leading to severe Russian sanctions against Turkey for a period), and the assassination of the Russian ambassador in Ankara in December 2016 – the two countries have managed the issue effectively, minimising damage to their wider relationship.

It’s not a binary relationship by any means – yet it works for both countries.

Good relations with Moscow enable Erdoğan to pursue his goal of strategic autonomy: leveraging Turkey’s strategic importance to position Ankara as an influential power playing a balancing role as a key swing state between the West and Russia, Iran and other Middle East countries. While formally a NATO ally, Erdoğan’s foreign policy approach is pragmatic and transactional and, occasionally, contradictory.

Turkey doesn’t want to become estranged from the West and left uncomfortably dependent on Moscow – for both economic and security reasons. But Erdoğan won’t let the United States and Europe take Turkey for granted. And he won’t have forgotten they didn’t immediately back him during the 2016 failed coup (by contrast, Putin’s quick show of support earned Erdoğan’s gratitude).

Erdoğan calculates Turkey’s independent stance gives him leverage with the United States and Europe – which he’s ready to use, shown by his hardball tactics over Sweden and Finland’s accession to NATO. Turkey’s efforts to strike a middle path are evident in its approach to the Ukraine war. Ankara quickly joined its Western allies in condemning Russia’s invasion of Ukraine, but declined to join them in imposing sanctions on Moscow. Instead, Turkey has positioned itself as mediator – most recently brokering (with the UN) the deal facilitating Ukrainian grain exports.

There’s a domestic political element for Erdoğan. Facing a tough re-election contest next year, Erdoğan will hope his high-profile efforts to burnish Ankara’s international status and influence curries favour with Turkish voters, offsetting the crippling impact of the worsening economy.

What’s in it for Russia?

While occasionally frustrated by Erdoğan’s actions in Syria and elsewhere, Russia needs to work with Turkey to manage its regional interests. Anyway, it knows Turkey can’t afford to get seriously offside with Russia, not least for economic reasons, but also because Moscow could complicate Ankara’s efforts to counter Kurdish groups in northern Syria. So long as the irritants are manageable, Moscow will tolerate them, calculating that Russia’s wider strategic interests are served by encouraging Erdoğan’s unpredictability within NATO, thereby complicating relations within the Western alliance.

It’s clear the complex but significant relationship between Moscow and Ankara, blending rivalry and competition, will continue to shape geopolitics across Eurasia.