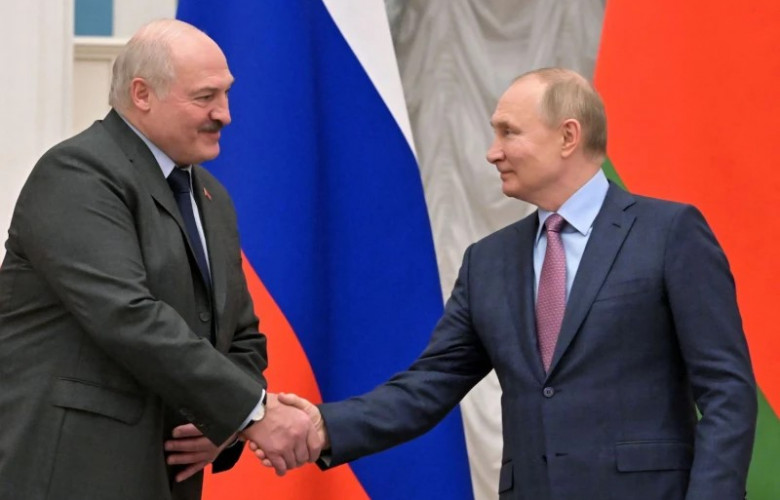 With the Russia Sanctions Act now in place, New Zealand this week turned its focus to humanitarian assistance for Ukrainians fleeing the war. UN figures on Monday showed that some 2.8 million refugees had left Ukraine since the war began.

On Tuesday, foreign minister Nanaia Mahuta announced New Zealand would provide an additional $NZ4 million in humanitarian aid to UN agencies, while immigration minister Kris Faafoi provided details of a new ‘2022 Special Ukraine Policy’ that will give work visas to Ukrainians who already have family in New Zealand.

The special two-year work visas for Ukrainians require sponsorship from New Zealand-based Ukrainian family members, of which Faafoi says there are around 1,600.

EU countries are currently accepting an unlimited number of Ukrainian refugees and are offering them residency for three years, with no visas required. Outside Europe, Canada announced at the start of March that it will also accept an unlimited number of Ukrainians for a period of at least two years, regardless of whether or not applicants have existing ties to the country.

It is true that New Zealand’s new visa programme – which the Government believes will benefit around 4000 people – will undoubtedly help some Ukrainians who are fleeing the war. However, the requirement for existing family ties and sponsorship means that the programme is not open to Ukrainians generally and is far more restrictive than the offers from the EU and Canada.

In this respect, New Zealand’s new scheme shares some similarities with the special visas that New Zealand issued to Afghans fleeing the Taliban takeover of Afghanistan last year. In that case, applicants needed to demonstrate they had assisted the New Zealand Defence Force or another New Zealand Government agency in Afghanistan.

From the Labour Government’s perspective, one advantage of the new Ukraine scheme is that it effectively places the immediate burden on sponsors – i.e. the family members – to look after the new arrivals, a major asset given New Zealand’s ongoing housing crisis. Newsroom reported in November that the Government had asked public servants to personally assist with finding housing options for evacuees from Afghanistan.

Meanwhile, New Zealand’s general refugee quota remains at the annual 1500 level that Labour set in 2020. This target – an increase from the previous 1000 – has not been met. Just 263 refugees arrived in the 2020-1 year and only 463 have been resettled in the current year – a shortfall which the Government attributes to the “global impact of Covid-19.”

The Government said on Tuesday that it was still waiting to hear back from UNHCR, the UN Refugee Agency, on accepting refugees from Ukraine under New Zealand’s quota. But New Zealand could consider lifting its quota and acceptance rates even now: Russia’s war on Ukraine will only put further pressure on existing global refugee numbers that had already doubled over the past decade to some 20.7 million people, according to UNHCR data.

On the wider geopolitical front, New Zealand has more reason to be nervous than most when it comes to media reports that suggest China may provide military assistance to Russia.

Outlets including the Financial Times and CNN this week reported leaked US intelligence claims that alleged Beijing was willing to provide some level of military assistance to Moscow.

Amidst the fog of war, such individual reports need to be treated with caution – and China officially dismissed the reports as “disinformation”.

Still, the potential ramifications of any possible entry into the war by China could be enormous.

Until now, Beijing has to some degree hedged its bets on the war.

Chinese President Xi Jinping has not publicly condemned Russia for the invasion – and Beijing also abstained on UN resolutions calling on Moscow to withdraw.

But China’s foreign minister Wang Yi has also said the country “laments” the outbreak of war and has expressed an interest in playing a mediation role. New Zealand appeared to endorse this idea at the start of March, when it officially “encouraged China to use its access and influence” with Russia.

Wang Xiaolong, the Chinese Ambassador in Wellington, optimistically tweeted on March 1: “First round of talks between Ukraine and Russia must be welcomed. Although no agreement has been reached yet, as long as they are talking, negotiated settlement has a chance! Peace will have a chance!” 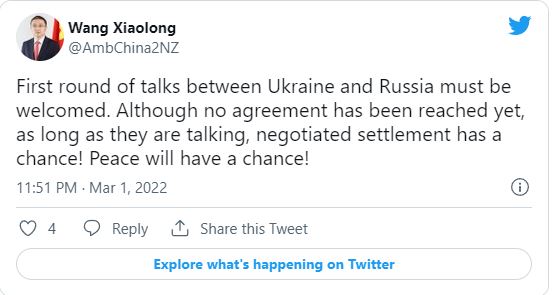 But on Tuesday, Xiao Yewen, the Chinese Vice Consul-General in Auckland and a prolific tweeter, repeated lines from a Chinese foreign ministry spokesperson who was turn relaying unfounded Russian accusations of US-controlled biowarfare labs inside Ukraine. The US has previously called the laboratory allegations “laughable” and “classic Russian propaganda.” If the US intelligence claims on potential Chinese assistance to Putin’s war are borne out, they might be a measure of just how badly Russia’s invasion is going.

It is now a real possibility that Vladimir Putin could face defeat in Ukraine, or could at least fail to achieve anything that comes close to Russia’s original objectives.

But the high cost of the invasion that is being incurred by Russia in the form of crippling economic retaliation by the West – including both the devastating official sanctions, but also the effective economic boycott of Russia by many Western companies – may trigger something even bigger.

Protests in Russia are still small and are being quickly crushed by Russia’s immense security apparatus. But as the economic costs from the war begin to mount, mass unrest and even regime change cannot be entirely ruled out.

Fears of these forces being unleashed – and the precedent that they might set – could provide the rationale for Xi Jinping to start helping out Vladimir Putin, who Xi has previously called his “best friend”.

For New Zealand, any prospect of Chinese intervention in the war should ring alarm bells.

New Zealand’s new Russia Sanctions Act allows for countries that assist Russia to be punished as well – a provision that was designed largely with Belarus in mind.

The definition of a “country who may be assisting Russia” allows for some wriggle room, but if New Zealand chooses or is forced to sanction China as well, the repercussions are likely to be enormous.

The collective Western response to any Chinese involvement in the war would probably differ from action taken so far against Russia, given the scale of the West’s economic interdependence with China.

Still, New Zealand is far more exposed to China than many others.

Some 33 percent of New Zealand’s exports – or roughly $NZ20 billion annually – are sent to China.

By comparison, the US sends only 8.8 percent of its exports to China – while the figure is just 4.7 percent for the UK.

Rural lender Rabobank last week warned the potential spread of sanctions to China would present a “dire situation” for China and trading partners such as New Zealand.

For New Zealand, the stakes could certainly not be higher.